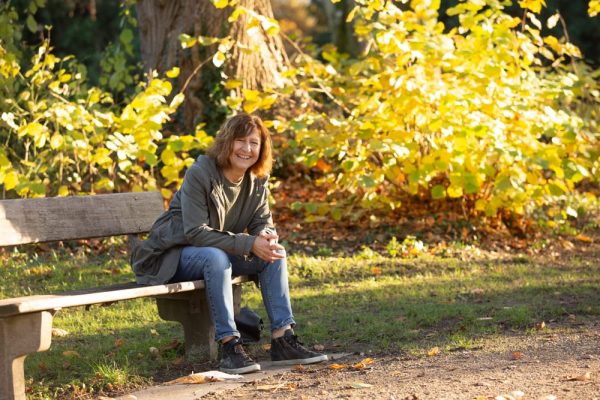 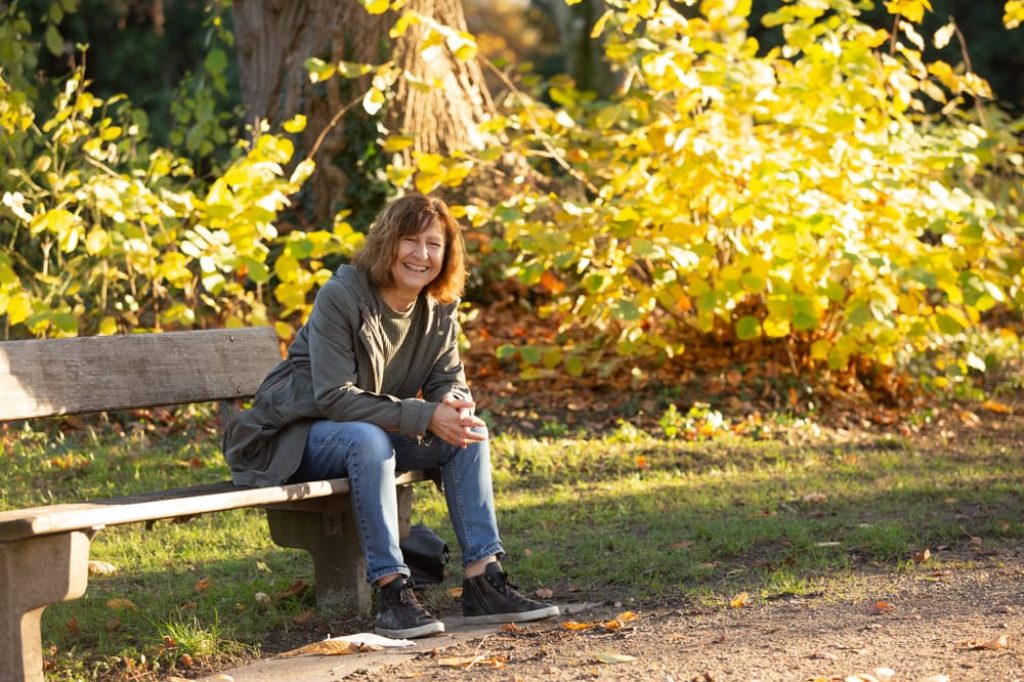 Irene Bush has the Psycho-Social support PSS for young people established at terre des hommes schweiz. Now Irene Bush is retiring and will continue to work for terre des hommes schweiz as a consultant. Reason enough to talk to her about the guiding principles of her work, about Justice and community spirit, the principle of hope and their commitment to young People from North and South in precarious situations.

"My path is not a straight onelinigera lot of things just happened." When Irene Bush says something, it's clear and she means it. I'm meeting with my work colleague at the office of terre of hommes switzerland at the Laufenstrasse in Basel. After over 20 years of commitment clears they these days, her job to us as recent pensioner still in the Work with young people to advise.

Irene Bush has contributed significantly to the fact that terre of hommes switzerland has acquired a core competence in Psycho-Social support by juvenilesin brief PSS (Psycho Social Support). The technical terms solution-oriented approach SFA (Solution Focused Approach) and youth participation - words that are not immediately apparent to outsidersin my day-to-day work with particularly vulnerable young people in Southern Africa, Latin America and Switzerland but big Wonders in a small way can cause.

Step by step to the goal

With the juevening participantsend in PSS workshops there is one thing above all, says Irene BushNot to be left to oneself, to create hope and have the courage to take possible changes into one's own hands and to implement them step by step."What simple soundsrequires for you as a professional much empathy, self-knowledge and openness, so that the young people have their paralyzing negativity overcomegain confidence and develop a positive energy können.

"Young people come and go, and we from terre of hommes switzerland are simply a station in their lives", says they. "The most important thing, what that we can give them is that they are, in themselves. itself believe and know how to make self-determined changes and decisions can.»

Irene Bush, who 15 years ago PSS Department from terre of hommes switzerland has built up, don't preach from the pulpit. She lives up to what she believes in., üeverywhere and at any time. Also with itselfst she applies the motto "think positive", "think positive". When asked about her slipped disc, she explains that the first thing to do is to take a close look: Is it even a problem? «With permanent restrictions one can learn, to the best of my ability to go around.» Sometimes there is a "framework", external circumstances that do not change.iessen. It's worthwhile the resistance does not. She is more concerned with the "exceptions in the system» to recognize, says Irene Bush"There are many small Things we can change. We just need to see them and the scope ...use."

"Everyone should have the same opportunities," says Irene Bush. The recordings were made at a workshop organized by terre des hommes schweiz  in the summer of 2019 with young migrant* women.

We leave the field of applied case studies and I ask my colleaguewhat they are doing for theen Lsolution-orientedn An rate SFA with young people in a fragile situation. "I am interested in people and I am interested in what we can do with our lives," replies Irene Bush. She is "richly endowed by the exchange" with others, told her. The principle "achieving something together" moves them personally and is also a strength of terre of hommes Switzerland. She is driven by a strong sense of justice. "I can't stand injustice and exclusion." says Irene Bush. "Everyone should have equal opportunities."

In the air-raid shelter in Jerusalem

What experience have shaped their values? We immerse ourselves in their childhood, in the important course for life has to be set. In the mid-1960s, when Irene is of primary school age, she moves with her family to Israel for a time. "My father became chef at the King David Hotel in Jerusalem," she says. The private school run by Catholic nuns, who visits heris a melting pot of cultures and religions. The Family lives in a Jewish neighborhood, and this is Irene talking to KZ-Üsurviving: "I didn't know then what the Holocaust was, but what they told me has left its mark on me.» During the Six Day War in 1967 they with others rolled into one tight Air-raid shelter without WC. "Our house was hit by bullets. This will leave a mark."

In London to the Artindustrial school

As a young woman zog es Irene Bush to London to the School of Arts and Crafts. "Art has always been a means of expression for me," she says. She foundse a family and bekon Kids. You makese Training and further education, among other things in the therapeutic area. Back again in Switzerland, leadse they for several years a studio for art therapy in Rheinfelden AGwhere they to lives today. She workse with dementia in a retirement home and in training with the Swiss Red Cross, was Seminar leader and supervisor on Alfred Adler Institute in Zurich.

How did so many but very different engagements come about? "I kept slipping into something." replies Irene Bush. "It just so happens: I was needed and I made myself useful." We'll exchange three such "contingencies" in the life out of: your commitment to the rights of the indigenous people in the USA, for People with HIV/AIDS in Switzerland and for disadvantaged young people in Tanzania.

For a good life until the end

When in 1978/79 a delegation of the Lakota–Sioux for the participation in a Human Rights Conference comes to Switzerland, Irene Bush interpreting on request. In the following represents it is the traditional government of des Indian tribe during ten years honorary throughout Europe. "I accompanied her to Geneva, organized trips to the reservation and did fundraising., narrated they. Ten years later, the matter is repeated in a similar manner: As At the end of the 1980s a Delegation HIV-positive and aid sick person People is coming here from San Francisco for an international seminar of the Swiss AIDS Federation, is they again for interpreting.

It's not far from here to the AIDS assistance in the canton of Aargauwhere she is committed for seven years. "I was fascinated to work with people who experience exclusion," says Irene Bush. But she had known..: «Iat some point you have to stop or you're gonna get drained. So much dying, so much suffering."

Equal say for all

Da pushes they at a Job advertisement from terre of hommes switzerland50 percent club administration, a Bread job alongside herr independent Activity and the kids. "I saw it was a good thing that there wase I like to get involved", she remembers. At that time, in 1999, he terre of hommes switzerland still a smalle Organization and been "thoroughly grassroots". "Everything was discussed with everyone"she says with a smile. In between she will even Member of the reassemble Management, until a new key Task assigned to them wearth: Denn the Aids-Pandemia haste hit sub-Saharan Africa with all its might.

The AIDS pandemic in Africa

"You can't even imagine it today," says Irene Bush"a whole generation just died away. The children were in the streets or people took in so many AIDS orphans that they couldn't take them anymore. At the beginning it at the But the big question was: when millions of children are left to fend for themselves, there are societies that no longer function. That's why Kurt Madörinmy former colleague at terre of hommes switzerland"We have to do something psychologically." No sooner said than done: 1998/99 founded dhe development organisation in Tanzania the Pilot project Humuliza for the psychosocial support of AIDS orphans. Humuliza, which was awarded by UNAIDSis up till now a partner project of terre of hommes Switzerland.

"My experiences in HIV/AIDS prevention and the support of the affected people in Switzerland were of use in developing new approaches for the prevention and support of children and young people with HIV and AIDS in Tanzania," says Irene Bush.

PSS in a North-South context

Im year 2000 went Irene Bush with Kurt Madörin to Tanzania for six weeks. Together with local employees endeveloped them psychosoindividual workshops appropriate to the context there and leadings through these with young people. «Important for the cultural acceptance was the inclusion of Adults from the communities, so that they the Teenagers unsupported», told her. Until today works terre of hommes switzerland not only with young people togetherbut binds also their socials Environment one.

In the following years Irene Bush a small Excursion and works temporarily in the founding team of REPSSI (Regional Psycho Social Support Initiative), the international association of four organisations, including terre of hommes Switzerland. "REPSSI is committed to developing and passing on sustainable psychosocial approaches in the work with children and young people in sub-Saharan Africa, and to making a political commitment to this," she summarises. In thisr time she had been travelling a lot, she says, "It was very intense." As terre of hommes switzerland in 2005 she asked whether she wanted to set up a PSS unitshe "accepted immediately."

Little Stories with a big impact

Look they for the last 15 years with the specialist department PSS back, do it proudsays Irene Bush: «terre of hommes switzerland has the courage to work in niches and try things out. This makes us more human and gives us innovative strength."

Meet them former Young people one PSS Workshops later sometime again, they see how they have progressed on their way, she tells. For example the young woman from Peru, who already with 13-year-old as Maid toiling and had to experience exclusion and assaults. To Start of the PSS-Workshops have the girl never even looked peers in the group in the eye, told Irene Bush. Later have it then and today, 14 years later, he said that he had the young Peruvian "the best teacher in the world", sagt Irene Bush"So many great stories come to my mind."

A serious subject with room for exuberance: the pictures were taken in South Africa in 2019. Participants of the workshop for solution-oriented work SFA receive their certificate from Irene Bush (in the picture above left).

Giving yourself a voice

Finally, I ask Irene Bush: How measures terre of hommes switzerland the Success of PSS and SFA? "A great effect is when young people make self-determined decisions and bring about change"she replies. Teenagers are particularly dependent and vulnerable and "depend on something coming from outside so that it can work from within"..

The greatest compliment in terms of impact measurement - benchmarking in professional development cooperation - is from a SDC-staff member who is involved in a youth project of terre of hommes switzerland in Tanzania Irene Bush says: "He noticed how open the young people were. They dared to speak, expressed their concerns and the whole thing workede not rehearsed, but kon by the young people themselves."