Western Sahara, the last colony in Africa, has been under Moroccan occupation for more than 40 years. It is now the third generation of youth from Western Sahara that is growing up under extremely difficult conditions deprived of basic rights. terre des hommes schweiz supports the Saharawi population in their peaceful struggle for self-determination as it was promised to them in 1991 by the UN.

Western Sahara is often referred to as Africa’s last colony. After Spain, the former colonial power, left the territory in 1975, its northern neighbour Morocco invaded Western Sahara. Today 174 000 people, among them many children and youth, are still living in refugee camps in the desert of southwestern Algeria under extremely harsh conditions. The other half of the population, living in the territory under Moroccan occupation, is exposed to daily and severe human rights violations.

Support in the peacful struggle
Although no country in the world recognizes the Moroccan claims to the territory, the occupation situation persists. A strong factor that contributes to cement the occupation is the illegal exploitation of resources in the occupied territory by Moroccan and foreign companies. terre des hommes schweiz supports the Saharawi people in various ways in their peaceful struggle for self-determination. We have been supporting youth projects in the refugee camps for more than two decades; furthermore we are addressing human rights issues and campaign against companies doing business in the occupied territory.

Brief history of a long-standing occupation

Western Sahara, a former Spanish colony, has been under Moroccan occupation since 1975. When the territory was invaded, half of the Saharawi population tried to escape the phosphor and napalm bombs by fleeing into the desert of Algeria. Today, more than 40 years later, 174 000 people are still living in five refugee camps in south west Algeria. The other half of the population is living in the territory under Moroccan occupation. A very small part of the population is living in the liberated territory.

No state recognizes the Moroccan claim
After 16 years of armed conflict between the Saharawi liberation movement Frente Polisario and the Moroccan Army, the UN in 1991 brokered a ceasefire. The agreement included a referendum on self-determination for the Saharawi people and the UN sent the peace keeping mission Minurso to organize it. This has since then been blocked by Morocco. Western Sahara is treated by the UN as the last remaining colonial issue in Africa and since 1963 listed as a UN Non-Self-Governing Territory. No state in the world has recognised the Moroccan claims to the territory.

The situation of the people living in the refugee camps in the desert is extremely difficult. They are suffering from harsh climate conditions and problems of food security. In summer the temperature can rise to over 50 degree Celsius, loods can destroy the houses within 15 minutes. The population is entirely dependent on international aid. The financial contributions are decreasing, so basic services in the camps can no longer be guaranteed. Food rations are cut; reports are confirming malnutrition mainly among children.

The psychological situation is straining for the youths growing up in the refugee camps. They have been living their whole life with the promise of one day returning to their homeland. People, who were born when the promised referendum was supposed to be held, are now turning 27 years old.

The socio-economic situation of the young generation is also marked by limitations. Due to the lack of higher education institutions in the camps, young Saharawis can only seek higher education abroad. Despite many obstacles young Saharawis in general are very well educated, owing also to the emphasis Saharawi society and its government are placing on the education of children and youths. This has led to a lot of well-educated young people who face very limited job opportunities, many which do not match their skills, and few economic perspectives in the camps. Therefore – besides our campaign work – terre des hommes schweiz has been supporting projects for youth in the Saharawi refugee camps for many years. Our partner organisation organises recreational courses, promotes open youth work and strengthens the cultural identity of the Sahrawi adolescents.

In the occupied territory of Western Sahara young people are facing discrimination concerning access to the labour market and are similarly suffering from a high level of unemployment. Due to a lack of higher education facilities in the territory, youth who seek higher education have to study in mainland Morocco, where they are severely marginalized.

The human rights situation in the occupied territory is worrisome. Children and youths are witnessing violence and human rights abuses or are victims themselves. Daily peaceful protests in the streets of El Aaiun and Dakhla are brutally stroke down. Political Saharawi prisoners are numerous, secret detention is frequent and UN and NGO reports confirm the massive use of torture and ill-treatment. The political prisoners of Gdeim Izik have become a symbol for the Moroccan suppression of the peaceful Saharawi resistance. 2010 a peaceful protest camp gathering thousands of Saharawis near a location called Gdeim Izik was violently dismantled by security forces. 19 political activists have been condemned to sentences ranging from 20 years to life imprisonment in the aftermath of the events.

terre des hommes schweiz is advocating for the respect of human rights in occupied Western Sahara and demands the implementation of the referendum on self-determination as promised to the Saharawi people in 1991.

The blessing and curse of natural resources

The international law requires consent
The involvement of many foreign companies is not only an ethical problem. Conditions for the exploitation of natural resources in a non-self-governing territory are clearly defined by international law: prior consent of the concerned people and they have to benefit from. None of this is the case in Western Sahara. The companies active in Western Sahara generate mostly employment for illegal Moroccan settlers and the Saharawi people clearly reject the business activities of foreign companies.

Swiss companies also involved
Also Swiss companies are involved in the illegal exploitation of resources. terre des hommes schweiz is informing and campaigning against Swiss and other companies active in Western Sahara. Their business activities are an active contribution in support of Morocco’s illegal claim to Western Sahara. Therefore they contribute to maintain a situation where more than 173 000 people are living in refugee camps in the Algerian desert, among them more than 65 000 minors. 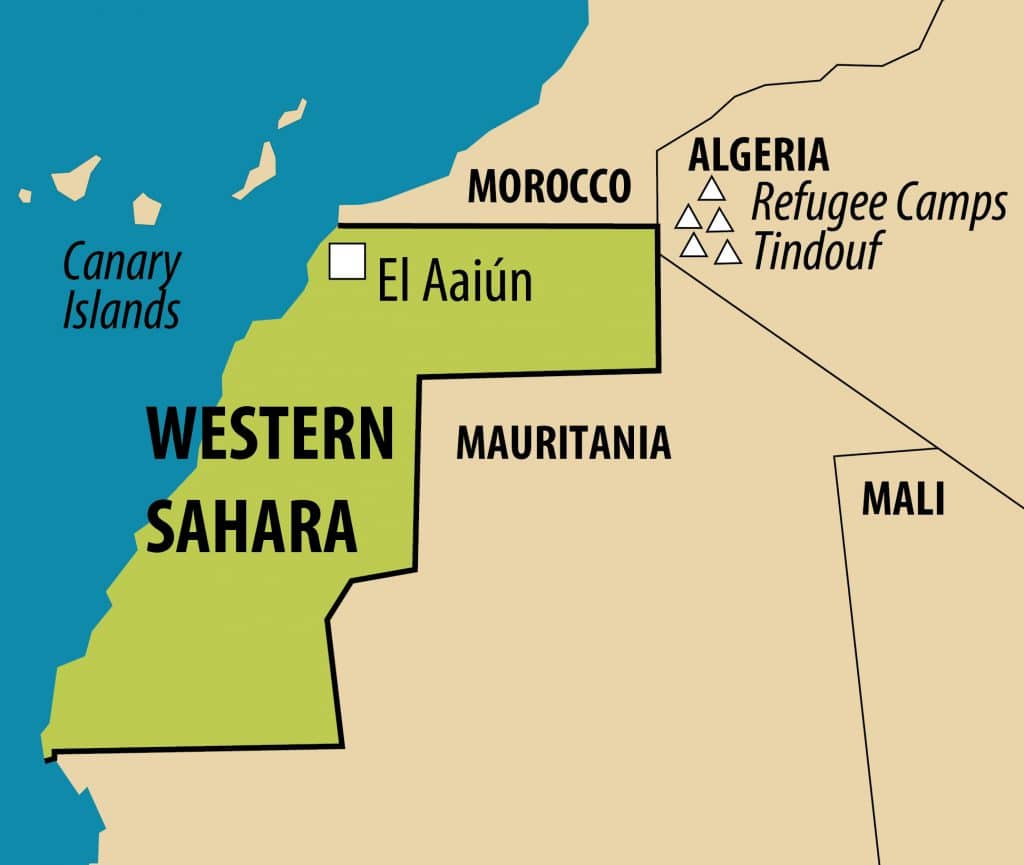 174 000 Saharawis live in five camps in the Algerian desert.