"Our young people need a lot of love" 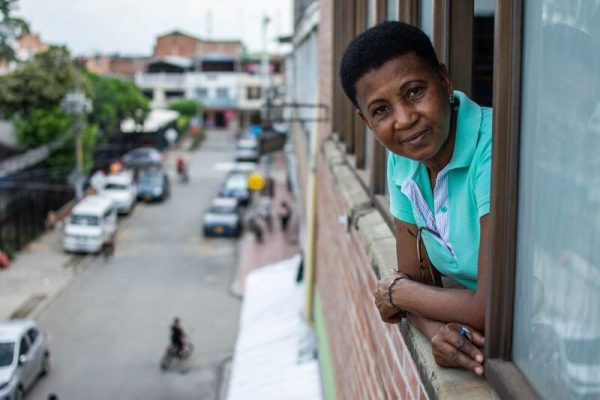 Elodia Nieves Balanta (picture) heads the foundation Paz y Bien in the Aguablanca district of the Colombian city of Cali, a poor district with 1 million people and a high Afro population. terre des hommes switzerland supports the charitable work of Paz y Bien in Aguablanca. 200 young people from 140 families are supported here so that they can follow a path other than that of violence and drugs. The interview with the director of our Colombian partner organization.

Elodia Nieves Balanta, what is special about Paz y Bien?
We are an organization that is rooted in the community. Most of our employees are women like me who live here. We are moved by the affection and love for the people of Aguablanca. We build social bonds, especially with the help of women. The majority of mothers in Aguablanca are single mothers. Our approach is to take care of the whole family and not just the young people. Human rights are an important issue. There are many conflicts here. We must learn to resolve them peacefully. We want to build a culture of peace and a fair legal system for all (justicia comunitaria, ed.).

In Aguablanca there is much violence. How does that affect your work?
When we started youth work over 30 years ago, there were many gangs. For example, there were conflicts because someone had stolen shoes or because of girlfriends. Now drug gangs are active here. If someone was caught stealing, people would say: He deserves to be killed. There was a lot of revenge. We had to start a process to repair the damage done and make a non-violent coexistence possible. We are still working on that today. When young people come out of prison, we listen to them, motivate and accompany them, so that they can settle in well in their familiar surroundings and are not rejected by the community.

How do the young people come to you?
As I said, the foundation has existed for over three decades and we are very well respected in Aguablanca. The young people now come to us on their own initiative because people in the communities refer them to us and appreciate our work. Or their mothers drop by with the young people. This happens when their children start taking drugs and they are worried about it. Or they think that their children don't know what to do with their free time and therefore want to join a group that takes them down the wrong path.

How would you describe the young people you work with?
They are young people with dreams and ideals. Many of them lack the chance to realize their goals. Their rights have been violated. They come from dysfunctional families with unclear rules that confuse them and cause them harm. They need a lot of love. When you listen to them and hug them, they say: "Nobody does that at home. They often lack affection. It happens that a teenager or young person says: My mother forgot my birthday. That's why gestures and rituals are important, such as celebrating birthdays together - activities where young people can feel important and share their dreams and ideals.

Many young people are very intelligent. There are so many artistic talents in them, which we at Paz y Bien encourage. There are talented singers among them, composers, dancers and many more. In the beginning they are usually very exhausting and difficult. But after the program they don't return to robbery and crime. Those who have gone through a program at Paz y Bien, study, work in the supermarket, have a paid job, family. And when they lose their job, we help them find a new one.

What is the Colombian state in Cali doing for these young people?
Not much. Here in Aguablanca, there's almost no support from the city government. The non-profit organizations that work here all get money from abroad. In January, the new mayor of Cali took office. A new contract had to be negotiated so that the city would continue to finance those youth centres in Paz y Bien that are not supported by terre des hommes schweiz and where we are accompanying 250 children and young people. However, because of the Corona pandemic, the city has cut social spending and has not renewed the funding. The new administration is also more interested in infrastructure construction projects and less in social affairs. We had to close five youth centres, and since then we have only been able to continue operating the four centres run by terre des hommes schweiz.

In March, the first Covid 19 case in Colombia became known. Thereupon, one of the world's longest quarantines began, which only in September led to the so-called «new normality» ...I passed over. How has the pandemic changed your work?
There have been drastic changes, for better or for worse. The pandemic has welded some families together and broken others. For many women it was problematic to suddenly have their aggressor at home all day long. This has increased violence against women, even feminicide (murder of women, editor's note). All this also had consequences for our young people. Working and learning virtually was stressful for the young people at the beginning because we were not prepared for it. Health education was also an important part of our work. We are proud of the fact that none of our young people have been infected so far.

In Colombia, the violence in Cali has recently attracted considerable attention. The massacre of five Afro boys in Llano Verde, a neighbourhood in Aguablanca, was particularly drastic. How do you assess the current situation?
There is no end to the massacres, especially of the youth. In addition, there are feminicides and the murders of social leaders (líderes and líderesas sociales, who are politically active in the community and committed to the environment, human rights and peace; editor's note). The organized groups of the mafia have moved from the country to the city. There is not much left and we are back in a similar situation as in the 180's when the drug war raged in Cali.

How do you deal with this new form of violence?
We know the young people who are in these criminal structures, but not their bosses. When they were gangs, we could talk to them and their families. Today the situation is much more difficult. These are armed groups. The leaders don't live here, but in more elegant neighbourhoods. The groups want to sell drugs and turn young people into drug users and dealers. They also want to recruit the young people for their armed groups. They lure them with money, weapons and motorcycles.

Are you and your team at Paz y Bien threatened?
No. We're not putting ourselves in the front row. But we are working on it so that the empowerment, the self-determination of the young people grows and they then say no when the armed groups approach them. We are respected in the neighbourhoods. The young people protect us.

Last: What does success mean to you?
Success for Paz y Bien is when families can live together peacefully and resolve conflicts peacefully. Success is when young people, who were not clear about their life project, deal with life differently after our program. And success is third, when alumni of the Paz y Bien program become tutors for other young people. All this means success for me and our community service in Aguablanca.

Who Hillary Hidalgo Nuñez Hidalgo (16) and Hermes Alexander Aranda (24) are and what they say about Paz y Bien: The portraits in Magazine by terre des hommes switzerland, No. 4 December 2020, page 4-7

Wave of violence in Colombia

In the shadow of the Corona crisis, a wave of violence is sweeping across Colombia. The region of Valle del Cauca, where terre des hommes schweiz works with young people to prevent violence, is also severely affected. Armed groups are murderously reaffirming their territorial claims there and eliminating political opponents. Only last week, gangs presumably killed five innocent young people. In June, a group of soldiers raped a 12-year-old girl. We demand that justice be done for these crimes and that the criminals do not go unpunished.